I didn't really have an opportunity to familiarize myself with Malaysian culture or history before coming, and while that may have been somewhat irresponsible of me as a tourist, it has been enjoyable getting to know the place starting from a completely blank slate. 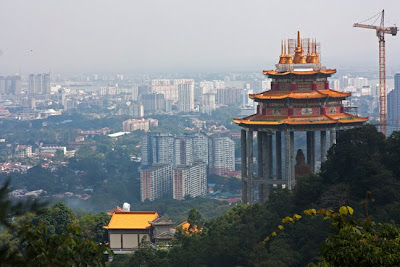 Kek Lok Si - The largest Buddhist temple in SE Asia
The first thing that took me by surprise was seeing the headscarves worn by most Malay women. Who knew Malaysia was predominantly Muslim? Not me. I've never even been to a country that was predominantly Muslim. There are mosques in every neighborhood, calling the worshipers to prayer from their minarets. While some of the headscarves were absolutely stunning, I didn't really know what to think about the burqas. I feel like Western society views burqas rather unfavorably, and I almost instinctively pullback after seeing it, but I don't know enough about Islam or Malaysian society to really be comfortable enough to criticize the practice.

Buddhism and Hinduism are the second and third largest religions in Malaysia, respectively. The few Buddhist temples I visited actually appeared to function as spaces for worship. The paint on the temples' walls are refreshingly settled and soft, their rooms filled with the smell of incense and the whispers of prayers nearby. This is in stark contrast to temples in China, where I often get the feeling that the walls were just painted and instead of prayers, loudspeakers blaring from the hips of tour guides.

Food. Surprisingly, it is very difficult to find Malay food in Malaysia. Some may even argue there isn't such a thing. In its place, Indian, Thai, and Chinese cuisines abound. Even when I go to a "Malay" restaurant, the dishes seem oddly familiar. For most meals, I find my way to my favorite discovery thus far in Malaysia: hawker centers, outdoor food courts where countless food-carts set up to serve the masses. The options are plenty, cheap, and most important of all, delicious.

Yesterday, I rented a motorcycle to explore Penang Island a little more extensively. Besides the Kek Lok Si Temple, I discovered many other gems--gorgeous dams, paths where the lush green forest spilled over, and hidden scenic views. See below!

A panoramic view of George Town 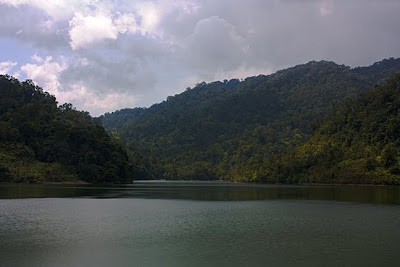 Looks like the James Rivers along the Appalachian Mountains.

yeah, i think much of the mountain range actually resemble the appalachians