In just over a week, I managed to go half way around the globe, passing through six cities. Although I was only in transit through many of them, I haven't had much chance to breath. All the traveling has really screwed up my inner clock; I think I would be able to sleep any time during the day and it'll feel completely natural.

Anyway, everything went according to plan. Took a flight out to Beijing, had a homemade smoothie, purchased some pirated dvds, boarded flight to USA. Then, spent a day in New Haven--played with Asher (former dean's incredibly cute son) for an hour, dropped by the Foote School (right by Yale) to see the Yali delegation, saw some students. Swung by New York City--saw more friends, a health panel, spent quality time with mom and grandma, and finally, schmoozed at the Yale-China Gala.

Held at the Pratt House of the Council of Foreign Relations, the gala definitely lived up to its hype--lots of reminiscing and, of course, copious quantities of wine! Over a hundred former bachelors, most of the current fellows, and countless other trustees, board members, employees, supporters, family members and friends of the Yale-China Association gathered for this occasion. It was a great time, especially the opportunity to talk with some of the former fellows, whether a couple years removed or even a few decades removed. Everyone's experiences were so different, and yet, in some fundamental ways, very much alike.

The most bizarre experience happened when I returned to China after the whirlwind trip through Northeast USA.

My friend Mike, Chacey, and I took a day to trek out to this small mountain just a short subway's ride from Shanghai. The mountain itself wasn't much, save for a lovely French catholic church at the top. The church was built in 1871, destroyed during the Cultural Revolution, and then "rehabilitated" at the close of the millennium. Besides those details, plus its exact dimensions and the materials used to construct it, there wasn't much more information about the church. 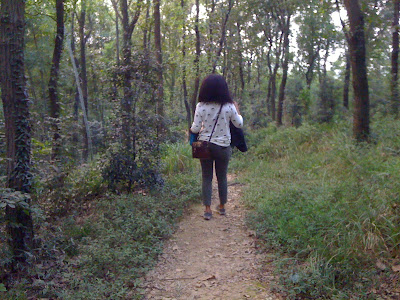 The three of us had hitched a ride to Sheshan with a few Chinese campers who eagerly invited us to spend the night with them. At first, we went to join them for their 烧烤 (shao1kao3, basically Chinese BBQ), but indecisiveness afterward resulted in missing the last subway back to the city and, having no other choice, pitching a tent with them, in the middle of a neighborhood full of beautiful but hauntingly deserted mansions (can we say housing bubble?). That's when the night became more and more strange... 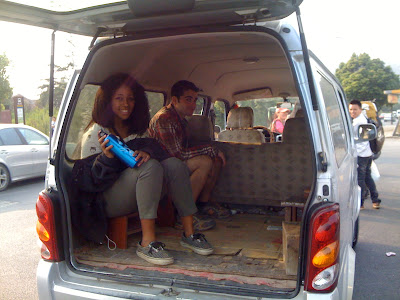 Chacey and Mike, in the campers' van.
Apparently, the thirty-odd campers were strangers to each other, having met on a website and only knowing each others online identities. Whether it was an outdoors group or a singles group wasn't entirely clear to anyone in my party. After the BBQ, the group gathered around to play some games. In the first game, Dollars and Cents, guys were worth $1 and girls were worth $0.50 (Sexist? Quite.), and everyone, hands linked, would run around a circle until the leader shouts out a value ("$5.50!"). The goal is to find the necessary number of guys and girls to make that value, and people left over are eliminated. All the running and hugging and shoving made for a very exciting game overall.

At the end, for punishment, losers were dry humped. I was one of the winners. Phew...One member of my group wasn't so lucky...

The last game was even more suggestive! Simple instructions: Person A passes a napkin to Person B. The catch? You could only do it by mouth! The Person B has to rip the napkin from Person A, Person C from Person B, and so on. Of course, the napkin gets smaller and smaller as it tears. If you mess up, or if you refuse the napkin, you have to get up and do "Truth or Dare". Piggy-back rides, writing Chinese characters with one's behind, and vulgar questions. You get the idea. Again, I performed flawlessly and avoided such embarrassment. =)

The experience was definitely interesting, if not totally surreal. It was like I was back in middle school--for example, no one actually had the nerves to "kiss" another person when dared. When the napkin got too small, the receiving person always opted out, fingers crossed for a lenient dare. At the same time, there is a tinge of bravery whose nature I can't quite put my finger on. I mean, I don't think I could ever go on a camping trip with random strangers I knew only from the internet. Actually, I don't know if I could ever build a friendship solely online at all. 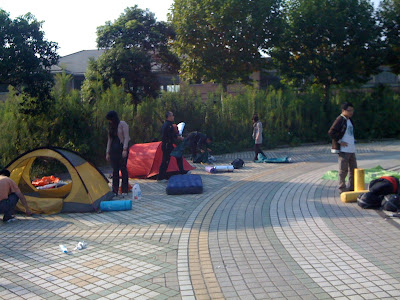 Our "campground." This was actually the first time I've ever camped! Strange first time...

Now, I am back in 'Sha, back to the blue uniforms, back to the classrooms, and back to teaching. Unfortunately, with the constant traveling this past week (six cities, 35 hours in the air, 15 hours on trains), I don't really feel rejuvenated. Hopefully this weekend will be nice and quiet.
Posted by Gang at 11:23 PM

aw. your camping location experience should be rectified

I am fascinated to read about one of my best friends from grade school and his current journeys, especially the supposedly flawless performance in risque group games and your first experience camping.

I agree, you owe it to yourself to find a much more suitable spot to live off the land, stargaze, and sing songs around a campfire for a night. You grew up in the Appalachia, no excuses!

propecia online propecia lawyer - where to buy propecia in uk

buy tramadol where to buy ultram - online pharmacy for ultram

cheap viagra can you buy viagra on ebay - viagra buy