It's been too long since my last post. The delay could be attributed to many things--my hectic schedule, China's ceaseless efforts at blocking anything and everything actually useful on the internet, and frankly, my own laziness. Actually, there are no excuses, really. Anyway, rather than give an exhausting summary of everything that happened the last two months, I will just write about the recent Yali Reach Out trip, a week-long service trip I took with twelve students and another fellow from Yali.

This was the third year the fellows have had the opportunity to take Yali students on a service trip. Each year, we partner with Yale students on their Spring Break as well as a third school. This time, we worked with Xiamen Foreign Language School (a prestigious high school in the Fujian province). This year, the delegations from the three schools went to Shanghang, a rural town three hours away from Xiamen City in Fujian.

The mission of the trip for the last couple of years have focused on education, specifically going into the classrooms and teaching basic English. In Shanghang, we went to the Baisha Middle School, where the entire school--students, teachers, and administration--greeted our arrival. After the obligatory opening ceremony (Ohh, China...) with its long-winded speeches, the "teachers" descended upon the students in their classrooms. 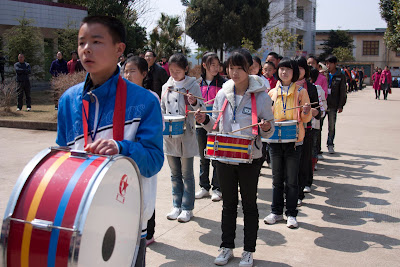 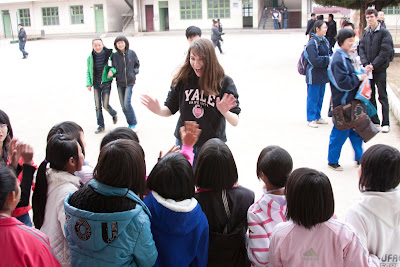 Greeting the Baisha students
Each classroom had a teacher from all three visiting schools. Due to scheduling difficulties, the visiting teachers had only three days with the students, seriously constraining the scope of their lessons and goals.

Nevertheless, I do think all parties benefited greatly. The Yale students--many of whom had not been to China--was exposed to a part of China that is usually hidden from the rest of the world. Rather than shiny new airports and awe-inspiring skyscrapers, they were living amidst houses made of mud and "left-behind children" (children who see their parents once a year, if that, because their parents are migrant workers in a faraway city). 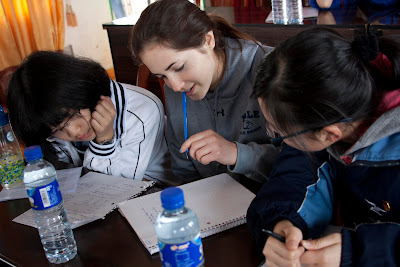 Working together to plan their lessons
The trip's impact on the Yali students was just as significant. Interacting with the Yale students not only improved their English tremendously, but for some, it introduced the possibility of going abroad for college. For others, it confirmed this goal. Furthermore, the students met other children who were of the same age but lead very, very different lives.

Most importantly, I think, this trip was an eye-opener for the Yali students as to what service can be. They are no stranger to "institutionalized" service, or service co-opted by their school and/or by the city government. For example, they would be required to stay on city buses all day, making sure the young give up their seats to the elderly. More often than not though, the students are told just to seat down and mind their own businesses for the day.

At Baisha, the Yali students realized that they can have a very real impact on their own society, and that being in a privileged position relative to most of the Chinese population, they have an obligation to do so. Even if they make a difference in only one other person's life, the latter can go on and do great things. The rippling effect can be explosive. I think this epiphany has really excited the students, and many of them are already searching for ways to improve their country. 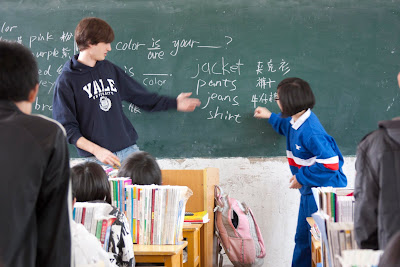 The lesson, in action.
Personally, this trip was a very unique experience for me both in the challenges it presented and also the benefits it allowed. Along with my co-leader, we were in charge a 45-person group where ages ranged from 14 to 21 (you can imagine the problems and difficulties that come with such a group). I had to give an impromptu speech in front of an audience of hundreds. I didn't find out about one of my classes until ten minutes before the class was to start. Events and activities were planned and canceled on the fly. Sweat beads rolled.

In the end, these challenges are really nothing when compared to the benefit: the opportunity to become close the Yali students, to know them as more than just students and for them to know me as more than just a teacher. At Yali, I am the waijiao, the foreign teacher. While I do some activities out of class here and there--library hour, a English musical, a Christmas program--I am always seen as the waijiao. For that week in rural Fujian, I could put English lessons on the side and focus on larger issues with the students. What do they like to do for fun? What are their passions and ambitions? What are their fears? What are mine?

For the two years I am in China, I, too, can be more than just a teacher.

(The kids kept a blog throughout the trip. There are posts in English as well, so feel free to check it out!)
Posted by Gang at 8:46 AM

good post son. really mature writing albeit ironically with lots of typos - too much chinese? :P

Haha, yeah for sure, my english has gotten worse, especially after reading journals after journals where poor grammar/spelling abound. i don't really know whats right or wrong anymore..

since today was the first nice day of the year, i decided to write this post outside. that could've been another reason for all the typos..