I think one of the interesting and unique things about this summer program is that, once a week, we are required to mingle with the natives and discussed with them a topic relevant to what we are currently studying in class. We usually bring up the topic, try to give them an overview, and then listen to their views/experiences before sharing ours.

In the first week, we discussed how the educational system in China is quite different from that of the States. Additionally, Chinese parents are so much more demanding than the average American parent. To find out more,I went to the most well-knowned high school in Beijing: School 101. That place is huuuuuge! I felt like I was on a middle-sized college campus, no lie! Very pretty as well. Anyways, I met a high schooler who was willing to share his life stories with me. Apparently, he has to start studying right after school. The only break between that and his 11:30 bedtime was a dinner at 7. Intense. I definitely would not be able to survive that. I really admire the student for his ability to keep up the hard work and to know so clearly what he wants to do when he graduates (not a doctor nor a lawyer, but an ambassador to the States). I wish I did...

In the second week, we talked to regular Beijing people, whether in the streets or in the markets and in the third week, we were to interview Capital Normal University students. We discussed similar topics for both. Most of them believed that the States stick their hand in too many world affairs. But, I think everyone agreed that the government in the States is better because of its transparency.

This week, we went to the Capital Museum just to get a feel for Chinese history. I really enjoyed the displays of traditional weddings in the old times. The bride is lifted up on a sedan chair and taken to the groom in a "Bride's Procession." This procession is filled with loud gongs, drums, other musical instruments, and fire crackers. Of course, there are a whole lot of other important events that take place both before and after this procession. All together, they make for a very interesting wedding. 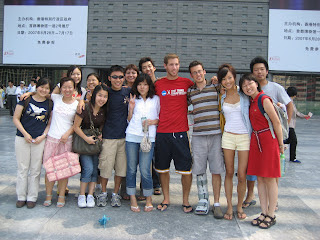 Arriving at the museum 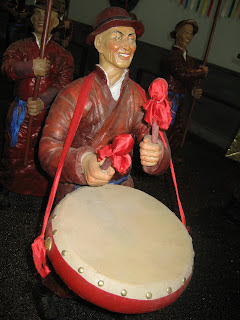 A drummer leading the bride's procession 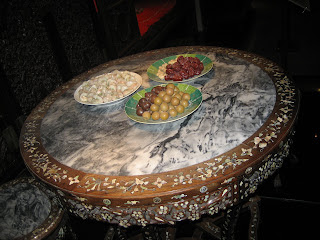 Munchies for bride to promote fertility. 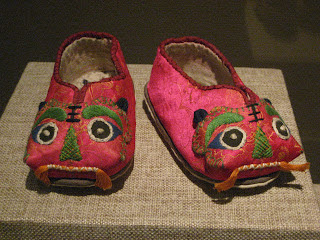 A pair of shoes for some lucky child. 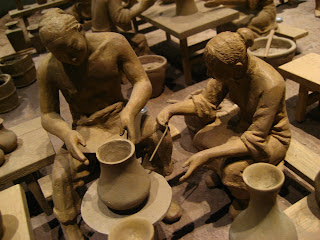 A clay model of how the Chinese use to make their famous porcelain china.

Anyways, tonight, I am going to Xi'an, home of the Terracotta Warriors! Update you when I get back!
Posted by Gang at 2:53 AM

terra cotta armies! i can't wait to see your pictures.