Sleeping by the Polar Bear

The long train ride from Beijing to Shenzhen was not without excitement--a lost ticket here and a broken rib there.* However, those episodes will probably fade from my memory before long, because even though they seem like crazy happenings, they never came up really in conversation or affected the mood after the fact. Instead, the trip was more notable for other things. I finished reading The Color Purple, undoubtedly one of the most emotionally intense novels I've ever read. The main character of the story suffers so much misery and so much tragedy--rape, lost children and sister, beatings, deaths-- and yet she is able to find love and happiness in so many different ways--in another woman, in God, in her belief that she will be reunited with her sister and children one day. It is the way I would like to live, I think.

Another major part of the trip, and probably more significantly, was getting to hang out with the other four mainland Yale-China fellows. Since our first orientation in May, I feel like we are getting to know one another better and better. This summer, I saw how each one of us tackled the language program and the city of Beijing from different angles: one fellow studied Chinese with a passion and ended winning the most 努力 (nuli, or hard-working) student award, one immersed herself in the ultimate frisbee summer league, led her team to a championship, and won the Spirit Award. As for me, I did a little of both, but I ended up putting most of my time working at an environmental NGO. I think that really reflects our individual personalities, values, passions, and preferences. The train ride at the end, in a way, pulled us back together and re-focused our attention back on our common goal--to be the best English teachers we can be in China.

Anyhoo, we are now in Hong Kong, with already two days of teacher training behind us. It has been fast-paced, but Director Chrissy makes all the exercises fun and exciting, playing lots of games, some role-playing, some brainstorming, basically utilizing all the teaching tools we should learn and apply for ourselves. I will give an update on the training in a dedicated post later, but I leave you with a picture of an infinity pool right by my residential building. 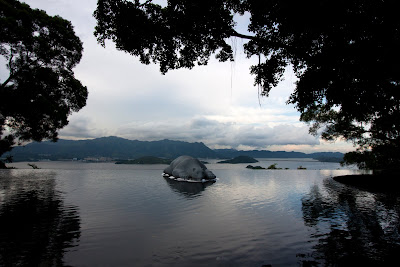 * One fellow lost a ticket only moments after entering the station. This caused much stress in the group, but it actually was pretty easy (but extremely expensive) to solve. Got on the train in the hard-seater section (standing room only), waited for them to verify that no one was on the booked cot, and purchased a replacement ticket at the same cost of the original.

And regarding the broken rib, another fellow fell off the top bunk in our cabin (literally a 10-foot drop), bounced off the middle bunk, slammed into the table, before landing on the floor with a big thud. Everyone stared.
Posted by Gang at 1:27 AM

Hope the latest crop of Light students had successful summers!

I love you and our yale-china family.